Share All sharing options for: Fiorentina 3 – Reggina 0: Head for the Bomb Shelter 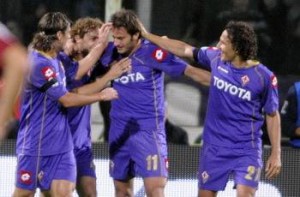 Today in beautiful Florence the Viola downed ten-man Reggina to win their third match in a row in Series A. The three goals came courtesy of a well-taken penalty by my man Gianpaolo Pazzini and a brace from Alberto Gilardino, who at this point is almost making it look easy. Like all Viola fans, I am delighted by the win, but I am also apprehensive that this will be the last ever Viola win, and perhaps the last football match ever played on God’s green earth. You see, one of the signs of the apocalypse has now happened: I correctly predicted the score of a Fiorentina match in my preview of the game. I now fear the end of the world.

Regular reads of this blog know that my predictions regarding Fiorentina tend to be a little, uh, optimistic. I have now been blogging the team for almost a year here on theoffside.com (which is a long time in blogging years: it’s sort of like being a columnist at a newspaper for 35 years) and during that time I don’t believe I have ever predicted a Fiorentina loss. Hell, let’s face it: if the Fiorentina youth team was sent back in a time machine to play Johan Cruyff’s early 70’s Ajax team (which won the European Cup three times) I would probably still predict a Fiorentina victory. Maybe a draw if they were playing in Amsterdam. Anyway, that unrivaled optomism tends to mean I don’t get a lot of these predictions right. So I am happy, but fearful, that today’s correct guess is a sign of bad things to come.

Anyway, there were a lot of things to like from today’s match; here were some random thoughts I scribbled down on my notepad as I watched the match:

• Stevan Jovetic is very, very good. Like, “makes me want to go online and order a Jovetic shirt” level good. Playing on the left today in place of Adrian Mutu, he pinged passes into the box with impunity, placing them on the foot of the point attacker time after time. He also created an immense sense of danger every time he entered the box. It’s true he needs to work on his finishing (he’s still just a kid) but he is obviously a special, special player. I really like Adi Mutu and have defended him in these pages every chance I get. We’re a better team with a healthy, committed Mutu on the pitch. But after Jovetic’s performance today, I could finally feel OK about selling Mutu to Roma if we got the right price. Because I think we have a replacement who can at the very least equal his contributions, if not surpass them. But the kid still needs time, and even the Great Man had to step in after the match and dampen the expectations a bit. But the kid’s going to be scary-good in a season or two.

• Gila is nearly scoring at will at this point. A brace in 19 minutes of play? I know Reggina was down a man and pushing forward to get the draw, but Jesus. Oh, and by the way, I hope everyone who has ever worn a Milan shirt (like Cesare Maldini and Douchebag Gattuso) continues to criticize Gila and tell people how he couldn’t get it done in the sacred red-and-black. Because it’s working. The boy feels motivated.

• I am not always crazy about Marco Donadel, and think he has a haircut like Ronald McDonald, but he performed well today, playing the stopper in midfield while Melo had a bit of an off-day, and also drawing out the central defenders of Reggina with some of his runs and fine long-distance shooting. Good job by him.

• It was also nice to see the real Alessandro Gamberini again. He was the last-option stopper in defense that he was all last season. When he’s on form I feel much, much more comfortable watching Viola games.

• As I said earlier, I’ve been doing this blogging thing for almost a year now. During that time I don’t think I’ve ever written that Bassy Frey has had a stinker of a game. He didn’t have one today. He didn’t have a ton to do, but as he always seems to, he made the saves he needed to make. But what can I say about Bassy Frey? He’s rock-steady.

• Finally, as many on the discussion board predicted, my man Pazzini got a starting slot today and played well. I really like Pazz (he scored a brace the first time I saw him play live) and I’ve always been a fan. He is, in fact, the only current Fiorentina player of whom I own a shirt with his name and number on the back. (Jovetic is in the mail soon, I think). We would all like to see Pazzini finish his chances a little more consistently, but no one can fault his work rate and passion for the club. Good to see him get a run-out today.

So, we got our nine points from our three games against lower-tier opponents. We now have a tougher stretch where we have Bayern, Palermo (in Sicily) and (gulp) Inter. We’ll take each match as it comes, which means I will next focus on the Viola’s big Champions League match against Bayern Munich on Tuesday.

In the meantime, enjoy today’s win, and the fact that, at least as of the publishing of this entry, Fiorentina are (very temporarily) tied for first place in the league, because no one else has played yet. (Juve is in progress as I type.) I’ll take it, and just hope the world doesn’t come to an end.