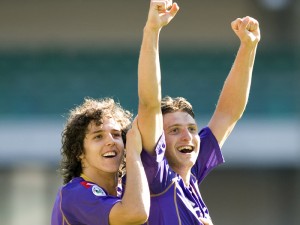 This morning I woke up, fed my son, and then as always went overt to the computer to see what was new in the world. I read about last night’s presidential debate and tonight’s big baseball game featuring my hometown Red Sox. Something, however, was nagging me, sticking like a thorn in the back of my mind. “Didn’t I used to watch soccer in the old days?” I thought. Thinking even harder, I remembered that I used to follow a team in that pretty city of Florence after I first visited there and watched the club thrash another club called Atalanta with two goals in the last eight minutes. “Yes,” I thought, “I did used to love a club from beautiful Florence. They were called….Fiorentina.” So I went to a Calcio website I like to visit and, low and behold, these Fiorentina guys are playing a match this Saturday vs. Reggina. “Wouldn’t that be fun to watch,” I thought, “for old time’s sake.”

All right, I’m kidding. The international break hasn’t been quite that long. My four-month-old hasn’t grown up and gone off to college. But it still feels like a hell of a long time. When the break first started I was actually a little grateful, as I had been spending a ton of time watching the many Fiorentina matches and then writing about them. I needed to spend a little more time with the family. But nuts to that, I’m jonesing for some football. It’s nice to have the boys back.

This Saturday the Viola take on Reggina in Florence. Good news for us in the States because Saturday games are televised here. Good news for Fiorentina fans in general because Reggina is not off to the best of starts and the Viola have been strong at home. The boys have also been strong in recent matches, winning their last two without giving up a goal. (Albeit vs. Genoa and Chievo, but still.) After the hammering vs. Lazio a few weeks ago a bunch of us said that the boys had to take maximum points from their next three games to be back in the race. We’re two-for-two so far, and other win on Saturday will but us in fine position after the first part of the season. A thumping win on Saturday will convince me that the early losses (on the road) to Lazio and Napoli were just bumps in the road and that we are back to our winning ways. I’m starting to feel good about how things are going this season.

It will be interesting, however, to see how the Great Man plays things this weekend. As everyone who has ever worn the purple knows, we have another little match this coming Tuesday vs. a team called Bayern Munich, which features a former Viola player who still holds a place in many of our hearts. What kind of team will he put out for Reggina, knowing that he really needs a point vs. Bayern after the earlier CL matches were a bit flat? It will be interesting to see. It seems as if the team is fairly close to full strength (apparently no one was hurt at the internationals, thank Christ) so he does have a bit of flexibility. To be fair, most everyone should also be pretty well rested. So we shall see.

Antonio Giosa and Emmanuel Cascione look to be out for Reggina. Martin Jorgensen and Per Kroldrup look iffy for the Viola.

Fiorentina is enjoying the home cookin’ this week (presumably wild boar, one of my favorites every time I’m in Tuscany) vs. a feisty but lesser club. I like their chances. A lot. I say the Viola win 3-0.

Here in the states, the match will be televised live at noon on RAI and on tape delay at 4:30 on FSC. (all times EST.)

It’s good to be back, everybody. I missed you guys. Hope all is well and that everybody is looking forward to the weekend. I will be back on Saturday night or Sunday with the recap. Forza Viola!